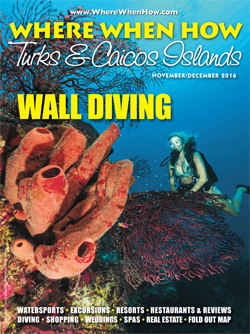 Where When How Turks & Caicos Islands November / December 2016

The Caribbean
Wonder of the World

Means Of Exploration: Foot Or Fin

The quintessential explorer; often wrapped in connotations depicting a safari colour code, worn clothes, a pair of binoculars or a rather large monocle, they venture to the world’s farthest corners in pursuit of treading new, unchartered ground. Such pursuits, in stepping on the soil of many countries, is a notion although romantic, satisfies only half the possible ground left to explore, by virtue of its very mode; by foot. If traditional perceptions of adventure are based only on what we can step, wander and tread on, our exploratory compass is suddenly narrowed to what’s above sea level. Why must the world’s farthest corners reside on land? The world’s mass as we know it is predominantly below sea level anyway, with the very landmasses we know as countries, mere tips of the icebergs to their origins beneath. Such geological support structures, rising from the earth’s core up through the ocean, hold our countries down and pin them to their geographical coordinates. It’s logical then, even necessary, to apply as much emphasis put on exploring far-flung countries above land, to exploring countries below land. Luckily for the Turks and Caicos, that’s a shift that’s already occurred. 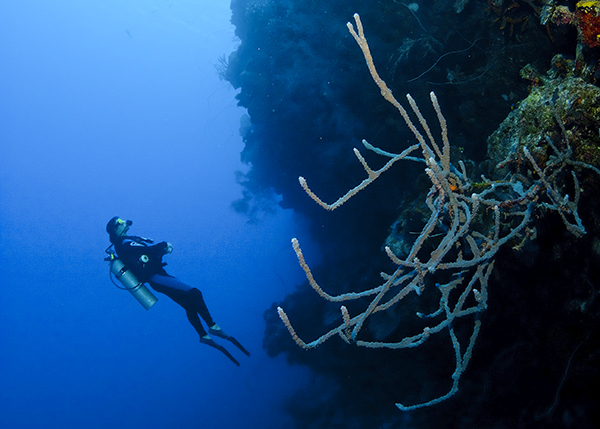 Diver at the wall at Northwest Point. Photo by David Gallardo of Brilliant Studios.

Above the water’s surface, the edge surrounding a landmass is a coastline. Below the surface, this edge is known as a wall, descending thousands of metres to the ocean floor. This is an impressive feat, considering the dry-land equivalent of a ‘photo-opp-worthy’ coastline averages just 100 metres. The landscape here is, inevitably, defined by its depth; shallow meets the deep very quickly, creating vertical drop offs resembling that of underwater cliffs. The result, is an environment in which small and big fish are brought into the same scope, providing a Goldilocks situation for divers and photographers; just the right amount of visibility and abundance of sealife to enjoy nature at its best.

Since the rise of recreational scuba diving in the heyday of the Jacque Cousteau 1940s, exploring walls surrounding landmasses has allowed divers to gain access to the world’s most stunning natural wonders, the most popular being the Great Barrier Reef in Australia, the Turks and Caicos Islands, Palau, Cayman Islands and Cozumel in Mexico.

There are three things you can get diving you can’t anywhere else. One, the feeling of weightlessness, which unless you’re about to embark on the next cosmonaut space mission is as close as you’re going to get. Two, the surreal atmosphere of being under water. The zen-like feeling of being 60 foot down and actually being able to look up at the water’s surface, and the sky behind it. Three, a tangible understanding of the personality of fish. My favourite species is a Pufferfish, but this wasn’t always the case. I’d seen pictures and descriptions of how it behaved, but no idea how slow and calculated its movements were until my first dive. Of course, such movements can be seen on video, but the discovery of the subtle, authoritative personality a Pufferfish exerts in relation to fish around it, is an insight rarely acquainted with recreational sports. 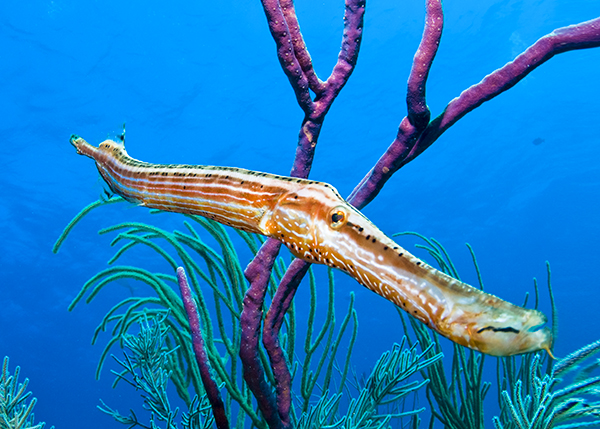 Filefish spotted at the wall at Grand Turk. Photo by David Gallardo of Brilliant Studios.

It’s needless to say there are a multitude of worldly tropical coordinates that offer quality wall diving at bath-like temperatures, but the colour, size and diversity of TCI’s underwater landscape, are just a few reminders of why its worthy of its world-class status. Kelly Currington, a Master Scuba Diver Trainer from Dive Provo, fills us in. “When you ask divers why they chose to come here; it’s always the same answer; the walls. From the experienced to the beginner, the easy navigation and absence of strong currents means it’s highly accessible, which is different from a lot of dive destinations around the world.” Notable calendar highlights are the North Atlantic Humpback whale migration from late January to early April, and the spotted eagle rays and possible manta rays of the winter months. “It’s very common to hear Humpback whales on dives, and if you’re lucky, you might see them.”

Home to the third largest barrier reef on the planet, the size of TCI’s reef is what gives the vertical walls here their dramatic drop-offs. “The variety of marine life among these drop offs is so abundant, you can dive the same sites repeatedly and always see something new. With very little current, healthy reefs, and plenty of sharks to maintain its eco-system, it is a huge draw of pleasure for divers and photographers.” To put TCI’s wall into perspective, the Grand Canyon has a depth of approximately 6,000 feet (approximately one mile). The Wall reaches depths of 6,000 feet, so if you can imagine the Grand Canyon underwater, you’re pretty much on the money.

It’s easy to get the impression from a single wall, that the landscape throughout will be the same. Characteristics however, vary extensively, in depth, geological formation, and the marine life both these generate. In the Turks and Caicos Islands, what holds the wall in such world-class contention is the degree of its variety; it’s vast, unparalleled and exactly why divers come from far and wide to explore. So with insight from Master Scuba Diver Trainer Kelly, who over 2,000 dives in TCI alone has gained more knowledge of the ocean than a migratory fish, these distinctions are outlined in her own words, highlighting the appeal differentiating TCI diving from the rest of the world. Characteristics are based on topography, coral and sponges, and marine life of four contrasting dive sites. 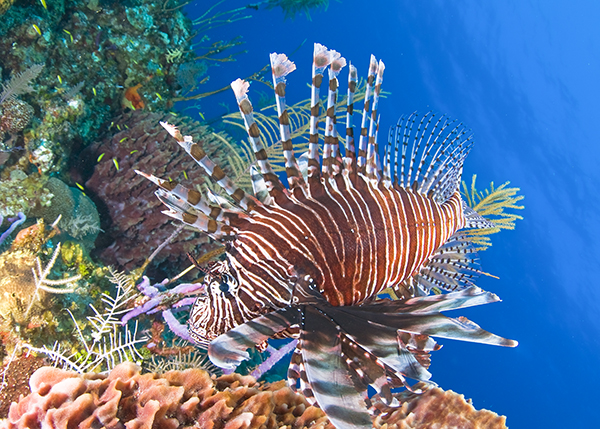 Lionfish on the reef at Providenciales. Photo by David Gallardo of Brilliant Studios.

This site has something for everyone, the wall is covered in massive barrel and tube sponges, sea fans, gorgonians, and sea whips; a visual kaleidoscope of colours and textures. Make your way to the edge of the wall to see the stunning topography it holds. Starting at a depth of about 55 feet, it drops off to a breathtaking 6,000 feet. As well as an abundance of milk conch, queen conch and southern stingrays, divers who love macro are in heaven here. Under the boat is a huge sandy patch with lollipop algae, housing sea creatures including pipehorses, fireworms, tiny shrimp, crabs, and juvenile fish in the coral heads.

The drop off here is dramatic, and in most parts it’s sheer; a straight drop to 6,000 feet. The ‘G’ shape of a particular section of this site indicates the best spot to dive, where the way currents and tides run leave an abundance of nutrients prime for seeing the big stuff: spotted eagle rays, sharks, huge schools of horse-eye jacks. Hawksbill turtles and moray eels also make regular appearances. A large forest of deep-sea gorgonians wrap around the wall to the west side of the “G.” Corals, sponges, fans, plumes, including barrel sponges (larger than an actual human), are everywhere. My favourite dive here was when the barrel sponges were spawning; it looked like huge caldrons with smoke billowing out of them, it was magical. 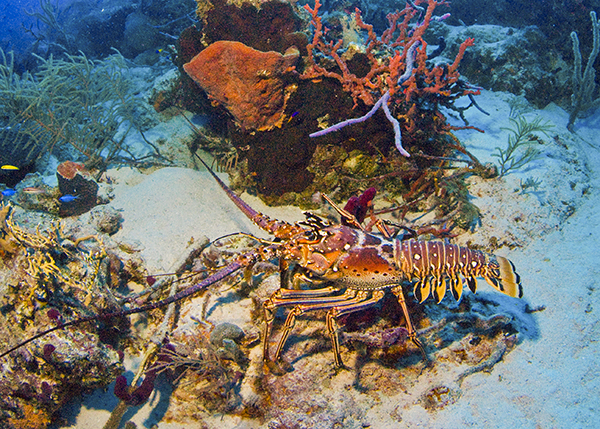 A Caribbean Spiney Lobster on the wall at Providenciales. Photo by David Gallardo of Brilliant Studios.

Amphitheatre is a unique site named after a feature on the wall, which looks like someone took a big ice-cream scoop and scooped out a section of the wall, before dropping it right in front. The overhang is covered in sponges and black coral, while the seating is the portion in front with a spectacular view of marine life, from schooling horse-eye jacks to big tiger groupers. The terrain under the boat is a series of rubbly coral ridges, divided by 40 foot sand channels running from east to west towards the wall. The wall here has spectacular varied drop off sections, some sloping down and some very sheer. A favourite dive here was when I was surrounded by a flurry of creole wrasse cascading over me like a purple waterfall.

Grace Bay offers some spectacular dives in relatively shallow water, with the name referring to its pinnacle coral formations. Depths range from 28 feet to the wall dropping to only about 100 feet, meaning sunrays easily penetrate it for excellent visibility. In what’s called spur-and-groove formation topography, these pinnacles divide the contrasting deep sand channels. Abundant colourful tropical fish cover the top and edge of the wall, with other marine life including huge Caribbean and banded lobsters and moray eels. Cleaning stations are everywhere here with so many cleaner wrasse and gobies it looks like confetti. 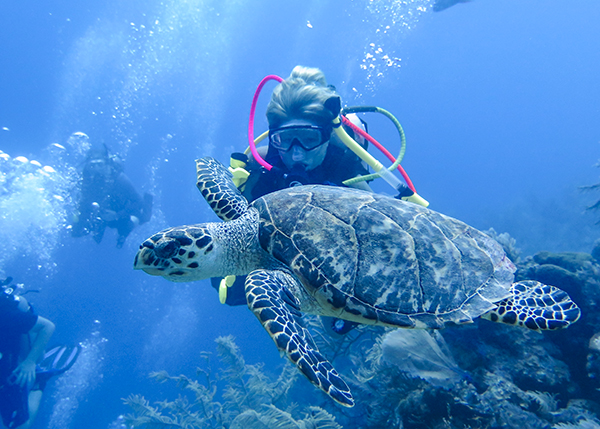 A Hawksbill Turtle with divers at the wall at Grand Turk. Photo by Blue Water Divers on Grand Turk

Over eight years of diving on average six days a week, 40 weeks a year, including two years on a Scuba Liveaboard vessel, Kelly distils what she’s gained from diving, and explains how its therapeutic effect in relieving a challenging time, instigated her entire career. “I’ve gained a deep-seated respect and desire for conservation of our oceans and marine life. After a tragedy that numbed me for many years, diving gave me my life back. I could suddenly see colour for the first time since the tragedy, I could feel my heart beating again. I learnt to appreciate the small moments that constitute our lives and give them balance in the otherwise hectic world we live in. The encounters I’ve had with the creatures here; from the largest to the tiniest, have changed me forever. I’m truly blessed to live and dive here every day surrounded by the beauty and creatures that are the Turks and Caicos.” 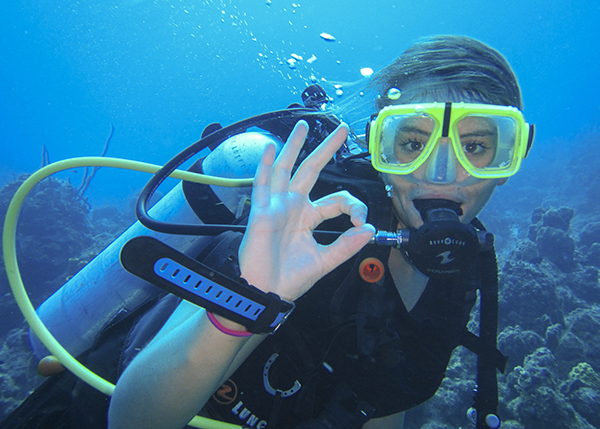 Diver giving the OK in Turks and Caicos Islands. Photo by Mickey Gopigian of Flamingo Divers.

The modern day explorer. Often wrapped in connotations depicting a pair of fins, an air cylinder, a mask and a rather scientific-looking wrist device, they delve to the depths of the world’s farthest corners in pursuit of discovering new, unchartered ground. If that isn’t a credible perception of adventure in 2016, perhaps that space mission is what you’re about to embark on...

An open mind is appreciated in regards to dive site preference. Dive operators visit sites based on weather and sea conditions that day, and are subject to change. The lack of control and spontaneity over what you will see under water, is appreciated above water, as often is the case... that the best creatures come, when you least expect it.

Care was taken to ensure correctness of information at press time. Information is subject to change without notice. Ad Vantage Ltd. accepts no responsibility for such alterations or for typographical errors or omissions. Entire contents of this page may not be reproduced in any manner without written permission of Ad Vantage Ltd. © November / December 2016 Where When How - Turks & Caicos Islands. 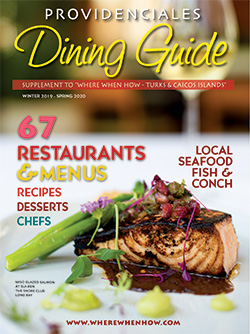 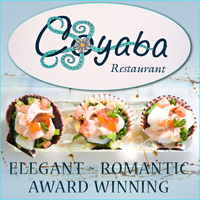