Hurricanes in the Turks and Caicos Islands 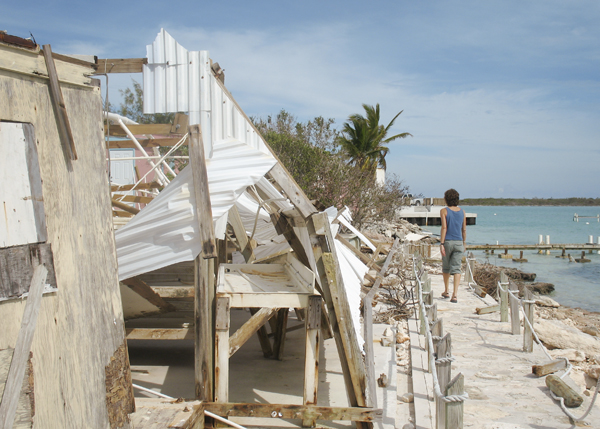 Damage to the Caicos Conch Farm in the aftermath of hurricane Hanna in 2008.

It happens so rarely that it’s almost not worth thinking about. But intelligent travellers are wise to remember that local weather can affect your vacation plans. Satellite tracking for weather prediction has made great strides but nothing/nobody is perfect. Mother Nature always seems to have a few tricks up her sleeve.

Hurricanes are rated from a Category 1 or minimal storm of sustained wind speed not less than 74 mph, to a catastrophic Category 5 with winds in excess of 156 mph. The power of a hurricane increases exponentially so the difference between one category and the next is quite impressive.

In 2014 there were just eight named storms in the Atlantic, of which two became major hurricanes. Areas of Providenciales received a record 21 inches of rain in August, 16" of that in 24 hours during Tropical Storm Cristobal.

We usually receive a minimum of four days warning that a storm may be headed our way, and often as much as two weeks, depending on its actual path and speed. If you haven’t left home yet, you can delay, and if you are here, you can get off the island before the storm hits.

If you do find yourself here during a tropical storm or hurricane, tune in to local radio and TV stations, which broadcast the details of a storm and government information about hurricane procedures and shelter locations.

Some other thoughts about visitors and storms:

1) If you are in a resort, or villa, the management will advise you. Many visitors opt to return home and the resort and villa managers will help you with evacuation arrangements.

2) Airlines: In the few cases in the past when TCI has been threatened by a storm, some airlines have sent extra flights to evacuate those who chose to leave, but space is limited.

4) Don’t get caught in the first place. In the TCI, September is the most likely time that a hurricane or tropical storm will threaten us. It also coincides with the time most likely for the tradewinds to fade and the mosquitoes to breed. Many resorts pick this time to close down altogether, and refurbish the properties.

5) August 15 through September 14 is the height of the hurricane season in the TCI. 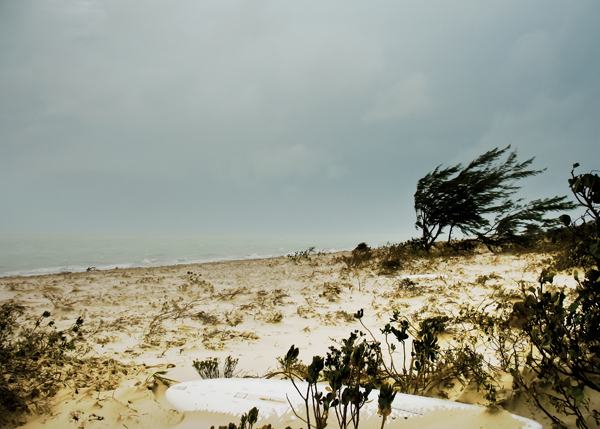 The windswept Long Bay Beach during hurricane Hanna in 2008.

A major affect of a tropical storm or hurricane is airport closings, here or at the other end, or both. Airlines do not want their valuable assets sitting on runways in the middle of a hurricane. They tend to be very cautious and shut down operations well in advance of the arrival of predicted heavy winds and rain.

Another consequence, during a storm, is that ‘the lights go out’. There are many safety features built into the power grid. However, if a power outage does occur during a storm or hurricane, power lines are not energised again until the storm has passed and the line crew has completed inspections and repairs.

It does mean we live without refrigeration, lights and air conditioning for a day or two, or six, but most resorts on Providenciales have back up generators, as do the water company and the hospital.

However, during the 29 hurricane seasons we’ve experienced, the TCI has been missed by most storms that were headed our way. We have prepared countless times only to have, thankfully, a non-event.

A storm can grow and change course in a matter hours, with astounding and terrifying effect. Being aware and prepared should be a fact of life for anyone who chooses to live or vacation in a hurricane zone. 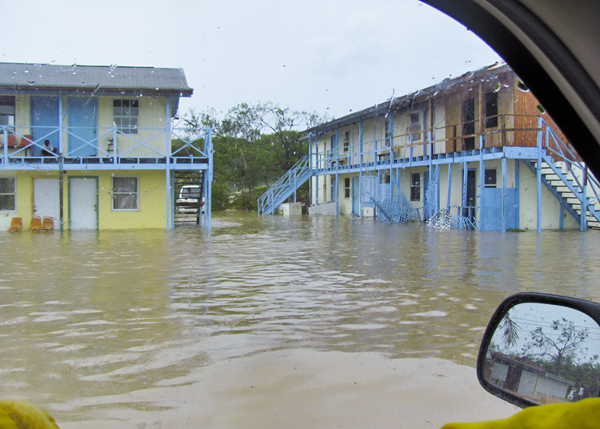 Flooding at the Caicos Lodge on Leeward Highway during hurricane Irene in 2011.

Online www.nhc.noaa.gov is the official site of the National Hurricane Centre. 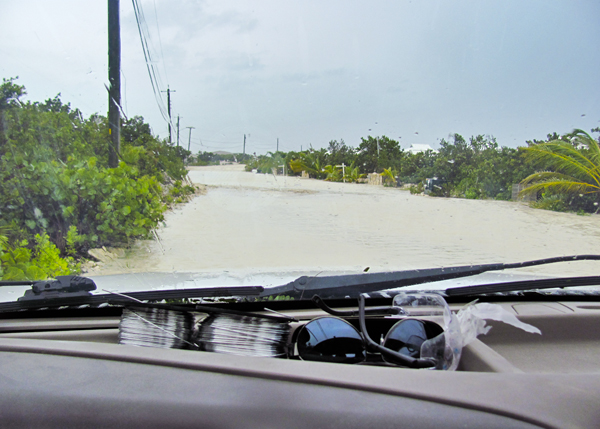 Flooded roads within Long Bay Hills during hurricane Irene in 2011.

Storm History of the TCI

1908: Sept 10: A storm with winds of 105 mph passed between Little Inagua, Bahamas and West Caicos/Providenciales, killing 19.

1926: Two storms, in July and September – one with 115 mph winds passed over West Caicos and a 150 mph storm also brushed the TCI.

1929: Probably the storm of Sept 24th - A hurricane with 155 mph winds crossed Ambergris Cay and then Providenciales.

1960: Hurricane Donna – Sept 7th – 145 mph winds made one of the longest lived storms, it was powerful and did much damage to the Turks & Caicos.

1995: Tropical Storm Erin formed over the TCI and on July 31st, spawning two tornados which crossed the center of Providenciales, from south shore to north, exiting over water at Turtle Cove. Winds of 128 knots were recorded over Turtle Cove before the instrument was destroyed.

2008: Hurricane Hanna – Sept 1st - the eye of this storm passed over Providenciales twice, causing major flooding on the south side of the island and surge on the north coast. A few days later… Ike.

2008: Hurricane Ike – Sept 7th - this major hurricane passed over Grand Turk, Salt Cay, South Caicos and Ambergris Cay as it headed west. More than 85% of the buildings on these islands, with the exception of Ambergris Cay, were damaged or destroyed.

2011: Hurricane Irene - August 23rd passed between TCI and Hispaniola as a hurricane, with no real effect on the islands.

2012: Hurricane Sandy - Oct 24th - caused flight cancellations with her 50 mph winds and torrential rains. The Mega One Triton was grounded off Governors Beach, Grand Turk. This storm went on to devastate the NE seaboard of the United States.

2013: Tropical depression which had been Tropical Storm Dorian crossed the TCI with minimal rainfall and winds on July 30th.

2016: Hurricane Matthew - In early Oct TCI was spared damage with light rainfall and winds under 40 mph.

2017: Category 5 hurricane Irma - Sept 7th - Communications infrastructure was destroyed, extensive damage to roofs, the north side of the eye passed over the Islands for more than two hours with sustained winds in excess of 156 mph. 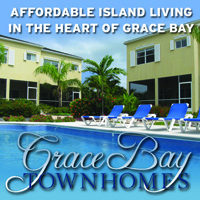