Uninhabited Caicos Cays in the Turks and Caicos Islands

The uninhabited Caicos Cays can only be reached by boat from Providenciales, North or Middle Caicos. Trips can be arranged for picnics, snorkelling and deserted isle adventures. Please do not litter. 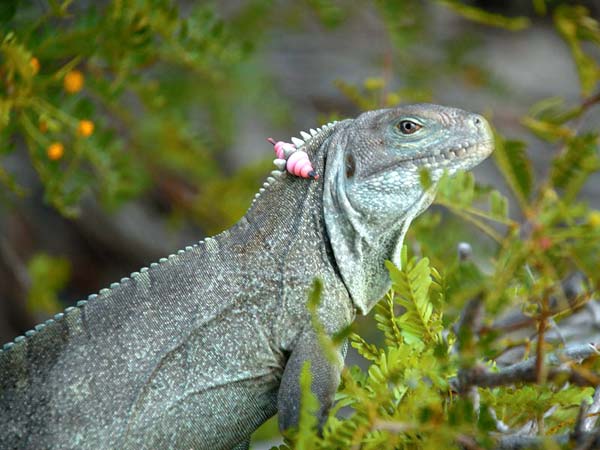 AKA Iguana Island, this is a popular tourism site. A national park, it has been minimally developed with pathways and viewing platforms from which to view our famous, endangered rock iguanas, (Cyclura carinata). There is also a small visitor center and there is a fee to visit the island. Little Water Cay is approximately 116 acres and has two small brackish ponds. Ospreys have been nesting here for many years. The small channel between Little Water and Water Cay to the east, filled in more than 20 years ago, connecting the two islands. 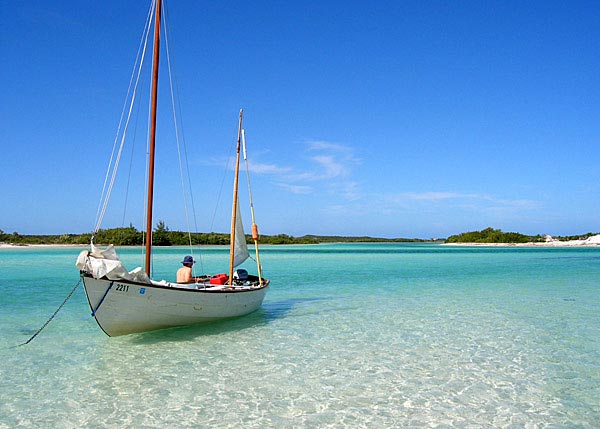 The National Park that lies to the east of North Caicos and northwest of Middle Caicos comprises an area 8746 acres in size and forms the outer boarder of Bottle Creek. It is made up of two elongated islands, East Bay and Bay Cay, that are almost merged together and it is difficult to tell where one begins and the other ends. The National Park also includes Major Hill Cay that lies in the north mouth of the creek and a whole series of mangrove bushes and quasi-islands; areas of mangrove trapped sand and mud that may lie above water only at low tide. 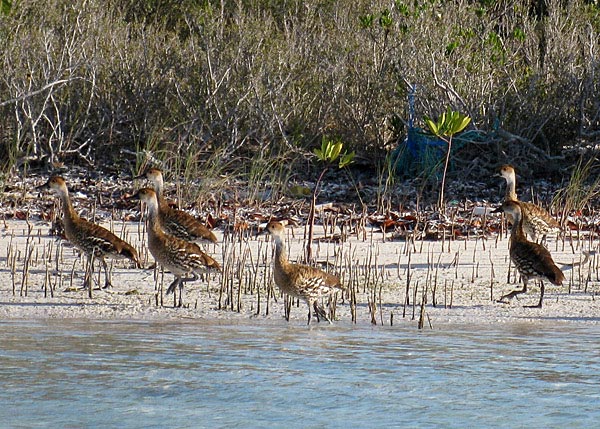 Much of the southern section is relatively flat and lined with the ubiquitous casuarinas trees. It is also home to numerous rock iguanas. The northern section has slight elevation from the creation of sand dunes and the vegetation is more of a typical coastal Bahamian scrub. The tip forms a gorgeous bay between North Caicos and Major Hill Cay. The islands have been used as grazing grounds for cattle from time to time but now there are few visitors save the passing fishermen and occasional boater or kayaker. Gibbs North Caicos Boats and Amphibious Adventures are your best source of information for trips to this area. 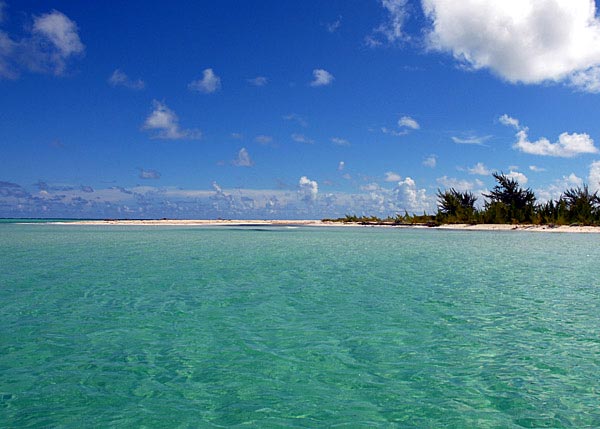 East Caicos is the only large island in the Turks and Caicos that is uninhabited at the present time. It was certainly populated by the Taino Indians over 500 years ago; evidence of their occupation has been uncovered at both over-ground and underground locations. Particularly exciting is the presence of petroglyphs on the walls of a cave at the western end of the island. During the latter part of the 19th century a large sisal ranch was developed and a good deal of infrastructure built. This included dwellings, roads, farm buildings, water catchment tanks, a long jetty and even a donkey-powered railway. Old anchors and a discarded canon can be found in shallow water near the island today. The wreck of a Spanish slave ship ‘The Trouvadore’ was rediscovered in 2008 along the northern reefs and is believed to have played an interesting role in the lineage of some Turks and Caicos Islanders. 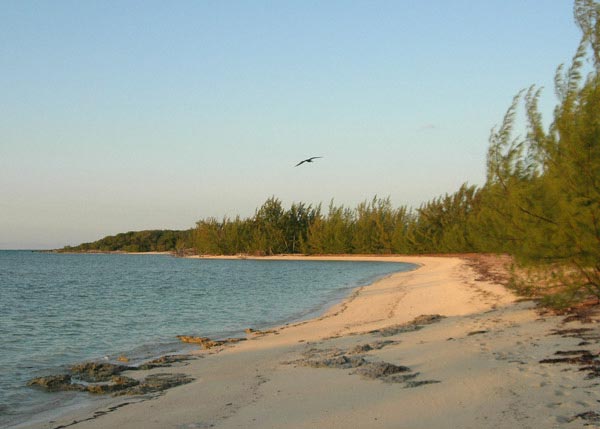 The sun setting over Jacksonville Beach on East Caicos

The two main areas where remnants of buildings can be seen are near Breezy Point on the north shore of the island and along the west coast in an area known as Jacksonville. There are miles of beautiful beaches all along the north and east coasts of the island. The southern half of the island is fascinating but fairly inaccessible, even by boat. It is largely a wetlands area comprising of salt marsh and mangroves. It is impregnated by a large number of tidal channels and creeks. Some of this is protected under the international Ramsar convention.

The caves on East Caicos are more remote and difficult to reach than those on Middle Caicos. A donkey railway was established over 100 years ago to transport valuable guano to the coast from the caves and it is this trail that one must follow. There are four caves spaced out along the 3-mile track. It is overgrown with countless trees, shrubs, and cacti, and progress can be fairly slow. 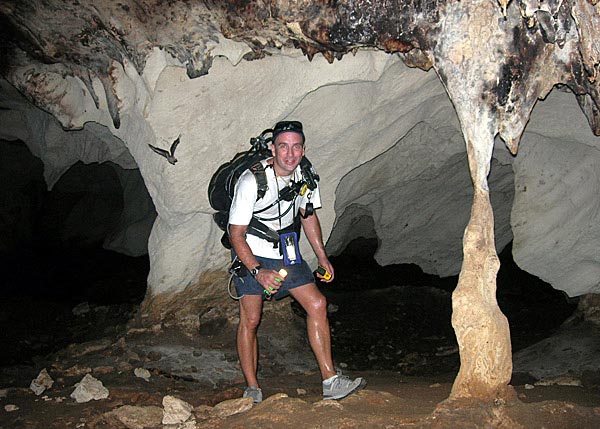 The East Caicos Cave system is home to many bats

The first two caves are located about 20 minutes down the track and are both labyrinths of tunnels and rooms that interconnect in very confusing ways. The passages range in height from 20 feet to just 2 feet high and there are a number of secret entrances and obvious skylights. The descending roots of the strangler fig are a common site and old bird and rodent bones litter these entrances, remnants of past meals by resident owls. The history books tell us that these caves were used by the Taino Indians hundreds of years ago for shelter and as a place of worship. A number of artifacts and skeletons were discovered by guano miners and Indian petroglyphs can be seen faintly on the walls of the caves today. 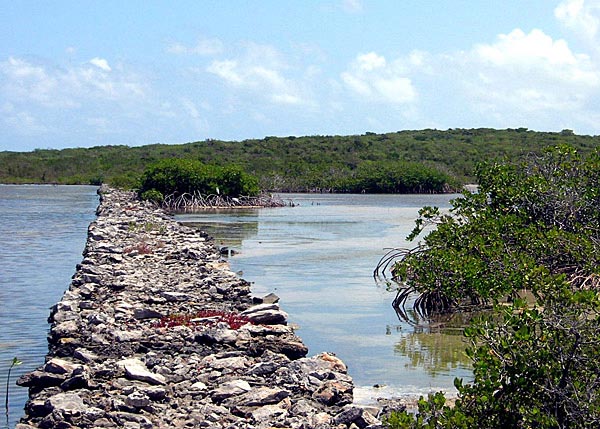 A causeway, crafted over 100 years ago, leads to more caves on East Caicos

The other caves along the trail are quite a bit further along and require crossing an old causeway over a shallow creek. Rising up onto the hillside the old railway continues onto some ruined buildings, past a large sinkhole (with submerged side tunnels leading off it), and onto the mouth of a vast cavern. Filled with water there is evidence that great pumps were used to drain out the caves, presumably to access the further reaches of the cave and remove the valuable guano within. The water is cold but welcoming after the hot and sweaty walk to get there. The ceiling is high and the floor extremely muddy. The cave is still home to a healthy population of bats and the water is full of shrimp living off their refuse. There is good reason to bring your mask, snorkel, and a waterproof camera; the long passage turns to reveal a rocky outcrop lit by a shaft of light from a skylight high above. It’s an impressive and beautiful sight. 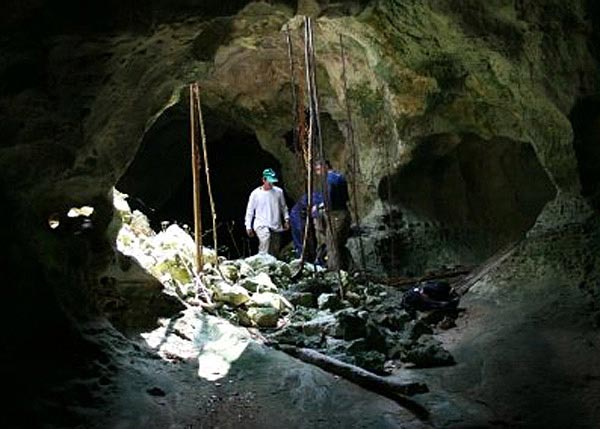 From this rather remote but awe inspiring location it is always tough to pull yourself away and begin the long trek back down the donkey trail to the coast. A back-pack, sturdy shoes, long pants, and a long sleeve shirt are essential. It is also highly recommended to use a guide as the trail is difficult to navigate and can be treacherous. There are also a number of holes scattered through the bush that drop into the caves beneath. You can visit East Caicos and explore the caves with Amphibious Adventures.

This tiny cay sits between Pine Cay and Dellis Cay and is a protected historic site. In 2009 the TCI National Museum conducted the first professional archeological survey of the cay, seeking evidence of the British regiments and local militia who served there. In two weeks many artifacts were found and catalogued. Seven of the original sixteen cannons remain under the sand, serving as a testament to the men who protected the Caicos Islands. Three of these cannons, in very shallow water, are visible to snorkellers. It is believed the shoreline of Fort George Cay has receded some 150 feet in the past 200 years and these cannons were once high and dry. 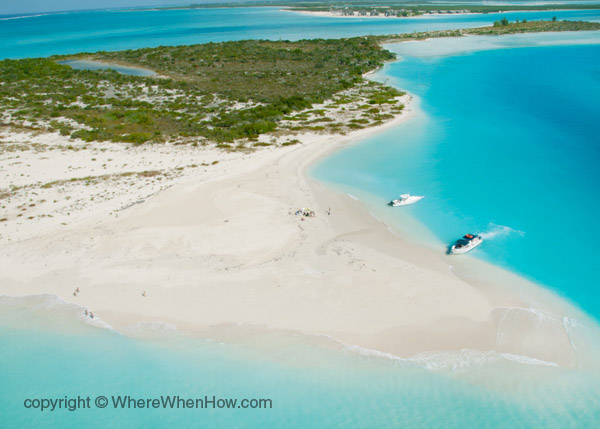 Once a hideout for buccaneer Françoise L’Olonnois as he preyed on passing Spanish galleons, now a bird sanctuary visited only by permit. The bird population more than doubles each spring as hatchlings are taught to fly. Nurse sharks mate in the shallow waters just off shore each summer. 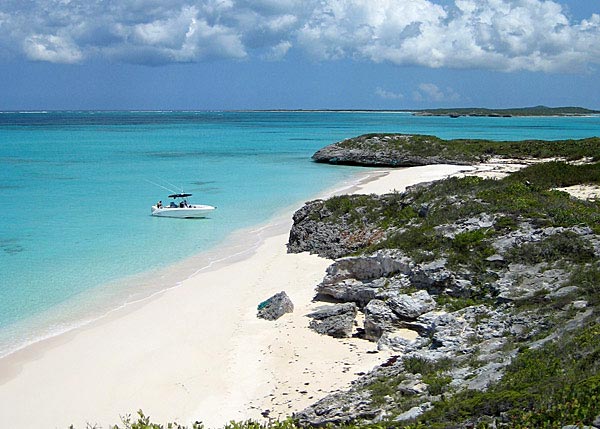 A remote and pristine beach on Joe Grant Cay

Joe Grant Cay is a beautiful island that lies between Middle and East Caicos on the east side of the Windward-Going-Through. Rarely visited due to its comparative remoteness it is a fabulous island to explore and call your own, even if just for a day. The northern promontory rises to a 40ft bluff with a spectacular little beach on the windward side and a perfect sheltered harbour on the leeward side. On top of the bluff, which is easily scaled from both sides, sits an old ruin that commands one of the best views in the country. One side of the island stretches down a long beach lined with casuarina trees and boarders the Jacksonville end of East Caicos. The other side stretches back towards the Windward-Going-Through. The interior is covered in fairly dense bush but it is not as impenetrable as some of the other islands in the archipelago. It is also possible to circumnavigate the island in a small boat or kayak at the right tide. Amphibious Adventures can take you on guided hiking and/or boating trip in this area. 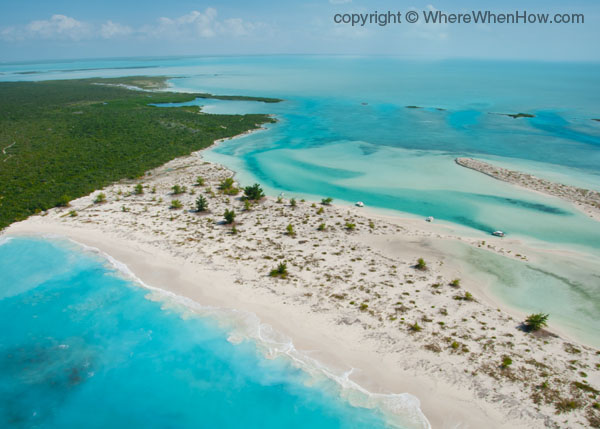 Half Moon Bay connects Little Water and Water Cay and this spectacular beach is popular with residents and tourists. Accessible only by boat, it’s a popular drop off site for ‘deserted island excursions’, beachcombers, beach volleyball and horseshoe aficionados. Water Cay was targeted for development but the economic downturn of 2008/9 put an end to that project. Today it remains pristine – a virtual paradise for sun, sea and sand worshippers. Its eastern shores are connected to private island Pine Cay. 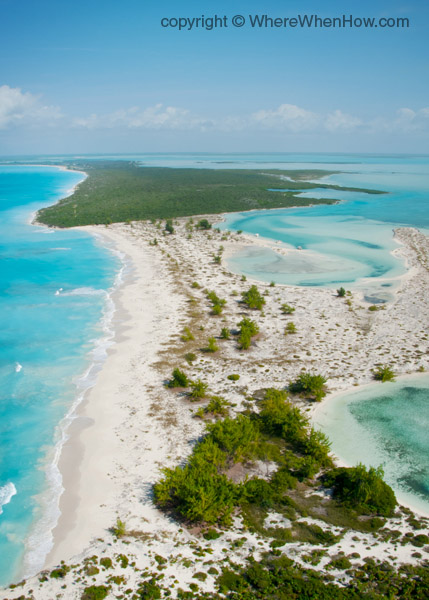 Aerial view from Little Water Cay in the foreground, across Half Moon Bay, with Water Cay on to Pine Cay in the background